Now I know that I am writing this as someone from “back east”, as most Perth natives would say, but in my last few visits to the fabulous city of Perth I have noticed that in nearly every conversation, whether its business in nature or not, the talk nearly always seems to somehow lead back to the mining industry. As a relative newcomer this perplexes me. Is Perth really that obsessed with the sector?

The statistics are pretty clear, with WA contributing an estimated 58% of Australia’s mineral and energy exports and employing 142,72 people directly within the resources sector. In the 2016 year, 28% of the gross state product is derived from the mining sector. The other side of this coin is that 72% of business and jobs are outside the sector. Thanks to PPB Advisory for this graphic: 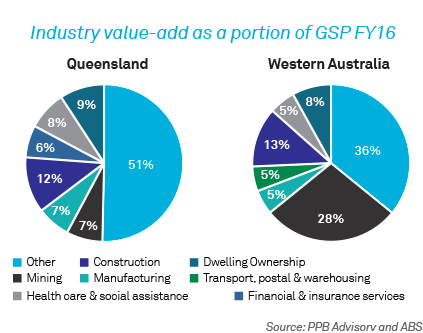 The metropolitan area that most would describe as Perth, is home to $2m people who have diverse interests, businesses, and lives. With so much opportunity outside the sector why is it that mining is so entrenched in the psych?

I was chatting with another recruitment professional on my last visit who is in a completely different vertical to those serviced by people2people. She had a very interesting story about a time she accepted a new role with a growing recruitment agency back in 2017. This new employer was keen to grow in the Perth market. They were a small team and the MD had aspirations of doubling in size quickly. On her first day she was given a list of mining companies and was told to sell services to the list “Perth is dominated by mining”. She left after the first day. I think her story represents how many businesses in the west think they can achieve growth, i.e. focus on the mining sector. What else would you do, it’s the biggest. Isn’t it obvious?

I also believe that when companies from ‘back east” enter the Perth market they also tend to think that to be successful you must deal with the mining sector. Is this because the memory of the last boom is so fresh? Did the boom really skew the perceptions of ordinary West Australians, or Australians in general, that much?

It may be a not be a radical idea but I would like to suggest there is untapped potential in WA for companies who choose to focus their energies on every sector other than mining.  For those companies, and I would include people2people on that list, who have a broader view on the Perth and West Australian markets could have less competition and a client portfolio that does not ride the boom bust cycle of the mining sector. I would never suggest you ignore the mining sector, but I think that WA is more than just a mine. Perth is a dynamic and thriving metropolis with a plenty of opportunity in a variety of industrial sectors. Stop being so obsessed and see the broader potential in the west.

Commencing his career with Deloitte in the late 1980’s, Mark is a qualified Accountant. In 1994, he decided to make...read more

Explore the impacts of COVID-19 on the Australian and NZ workforce.

Make your next career move with people2people